WHY TOURISTS ARE AVOIDING THIS BEAUTIFUL ITALIAN ISLAND 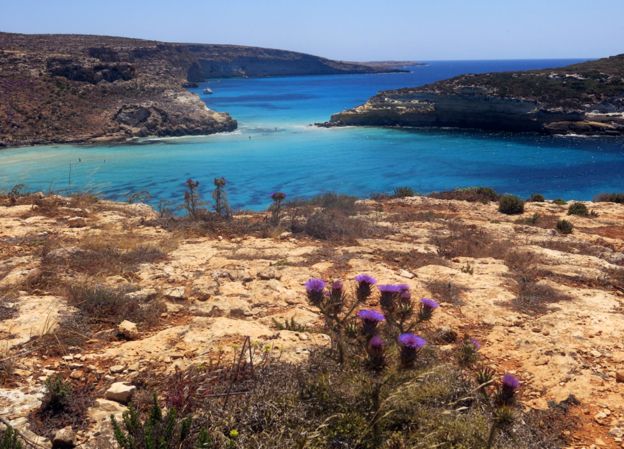 (P1) A sunny Italian isle in the Mediterranean with beautiful beaches and SPARKLING seas, Lampedusa sounds like an ideal holiday DESTINATION – but tourists are staying away.

(P2) Police have become a constant presence, sent to deal with the huge number of MIGRANTS arriving on the island from North Africa and the MIDDLE EAST.

(P3) At the island’s HARBOR, Giorgio is checking the engine of his small boat. Giorgio, a SKIPPER, tells me he rarely gets the chance these days to take tourists out on the OPEN SEA – he’s got no CLIENTS.

(P4) The island has some of the best beaches in the world. Its weather is mild and comforting even during the winter months. The surrounding COBALT-BLUE sea is full of dolphins, turtles, and beautiful coloured fish.

(P6) His girlfriend, Angela, hands him a cloth to wipe the salt off the boat’s windows.

(P7) “I used to work eight months of the year as a hotel RECEPTIONIST,” she complains. “Now I’m lucky to get three months work a year – the guests just aren’t coming anymore, even in summer.”

(P8) On the other side of the island, looking out over a beautiful COVE, Angela’s old boss Andrea looks DESPERATE. He’s just put down the phone on a potential visitor who told him he’d like to book for next spring, but his wife is a bit concerned they might bump into a CORPSE when they go swimming.

(P9) Andrea says that last year he was 50% down on BOOKINGS, but he doesn’t blame the migrants. He says it’s the way they’re managed.

(P11) “This whole island has become militarised – you can’t go anywhere without seeing men in uniforms with guns. It’s hardly a welcome is it?”

(P12) Lampedusa’s EXHAUSTED-looking MAYOR had assured me that tourism on the island was experiencing a RENAISSANCE, welcoming a new kind of socially-aware visitor who feels SOLIDARITY with the migrants’ situation.

(P13) Andrea agrees. “The mayor is right,” he says. “But unfortunately our new visitors are generally young and BROKE – they’ve no money for a nice hotel or dinner.”

If you found the passage difficult to read or had problems understanding specific words or idiomatic expressions, please discuss them with your tutor. The following discussion questions should be answered in your own words and with your own arguments.

What do the following expressions mean? Practice using each expression in a sentence; extra points if you can use it in conversation.

One thought on “WHY TOURISTS ARE AVOIDING THIS BEAUTIFUL ITALIAN ISLAND”